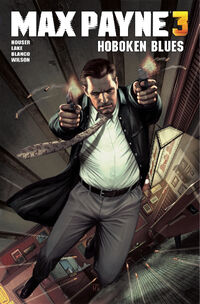 Hoboken Blues is a Max Payne comic book, the second part of a three-part comics series that serves as a bridge between Max Payne 2: The Fall of Max Payne and Max Payne 3. It was released on June 12th, 2012.

Issue #2 continues the story of the first comic book, After the Fall.

Max Payne enters Walton's Bar. He is greeted by bartender Marty, with a hobo-looking man is sitting near them. After ordering a Scotch, Max is asked by the bartender if he knows the man sitting near them, and he identifies him as his neighbor Brewer.

At the same moment, a woman enters the bar and asks for a Gin & Tonic. Remembering his wife, Michelle also enjoyed Gin & Tonic, Max flashes back to the time he met her in Hell's Kitchen during the mid 1990's, when he saved her from thugs trying to steal her bag. The two then introduced each other. Max then recalls their wedding, honeymoon and Rose's birth.

The story returns to present, with Max continues his conversation with Marty, who asks him if he was a cop once. Max then recalls his time with his late partner and best friend, Alex Balder, when the two were ambushing Punchinello Crime Family mobsters for selling Valkyr. He then remembers Balder's murder.

Max also recalls his final conversation with Jim Bravura as an NYPD detective, when he was asked by Bravura about Valerie Winterson's involvement with Vladimir Lem, before being discharged due to the events of the Cleaner Case. Max then reveals that Bravura had died a few months ago.

Max insults Tony, and the latter points a M1911 pistol at Max's face. During the ensuing chaos and Max's sarcastic retorts, Raul Passos enters the bar.