Take Me to Cold Steel

"The hidden truths were just around the corner."
―Max thoughts on his journey from the previous chapter.

Hidden Truths is the second chapter of Part III in Max Payne.

After Max Payne hears that "Operation Dead Eyes" has commenced, he goes deeper into the Cold Steel complex, coming across a document that mentions a lab worker attempting to smuggle out the chemical he was working on for a party. The chemist was caught and locked up in a cell in "D-6's old test facility." Max continues his way through Cold Steel, shooting past the mercenaries that guard the facility and avoiding many laser beam-emitting booby traps that explode if the beam is broken.

Max eventually comes across a security room, with monitors showing the entire complex; noticing an elevator marked 'D-6', Max decides to get to it and use the elevator to go deep into the core of Cold Steel, hoping to learn more about it and its guarded secrets. He pushes on, maneuvering past more laser traps, mercenaries and many broken gas pipes pouring out flames, eventually reaching the elevator designated 'D-6'. When he calls the elevator, alarms sound off, and Max is ambushed by more mercenaries coming up in the elevator. After gunfire is exchanged and the mercs go down, Max gets in the elevator and descends even deeper into the complex.

On the PS2/Xbox version, this chapter is divided into three sub-chapters: Hidden Truths, A Tight Operation and The Next Doorway. 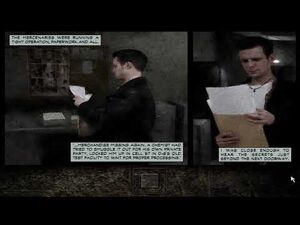