"Here I was again, halfway down the world, and still looking at the bodies of women I was supposed to protect."
―Max Payne.

Here I Was Again, Halfway Down the World is the ninth chapter in Max Payne 3.

After the Comando Sombra leader Serrano executes Fabiana, Max is now filled with despair after failing to save the woman he was suppose to protect. While a CS member endlessly curses Max, Max tricks the CS member by looking on his left at the same time a gang member looks on his right. Max then angrily disarms the Comando Sombra thug then knocks out the panicking member as he leaves the hideout. Max then discovers that the Unidade de Forcas Especiais has started a massive war in the Nova Esperança favela between gang members. While on his way through the favela he soon discovers that UFE are killing and kidnapping innocents. After witnessing the activities that UFE was committing, an UFE soldier almost caught Max while chasing a man, but the man was unlucky. Max soon a begins fire fight with a couple of UFE members. After the gun fight, Max then sneaks past the patrols and hides in a favela but unfortunately, he was immediately robbed by two gang members who were armed with a machete who confiscated all the weapons that he had then run from Max. Later on, the two were killed by an UFE armored personnel carrier. Unable to go through that route, Max finds an alternative and heads on.

After Max stealthily made his way throughout the slums, he soon finds Giovanna and Marcelo (with an gunshot wound as Serrano shot him in the leg in the second previous mission) being taken and threatened by two UFE officers. Later, Max soon discovers that the Crachá Preto and the UFE have a deal of organ harvesting with the second-in-command of the two organizations Milo Rego and Bachmeyer attending.

After the deal, Max follows Rego where Giovanna and Marcelo are held. Rego orders one of his men to burn Marcelo to death. After witnessing this, Max comes in and quickly knocks the member unconscious and confronts Milo who pulls out his machete. As Max begins to fight Rego, Max gains the upper hand by disarming and beating Rego to the ground, before forcing the machete into his neck, killing him. Max and Giovanna desperately watch Marcelo burn to death as it was too late to save him. Then they hide from Álvaro Neves, the Crachá Preto leader, who finds his friend who had been killed by Max. 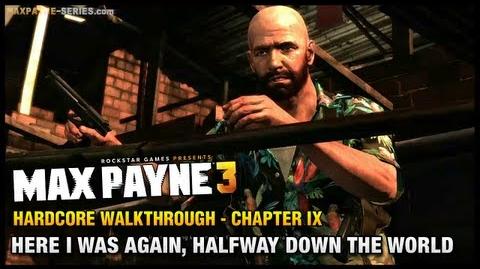 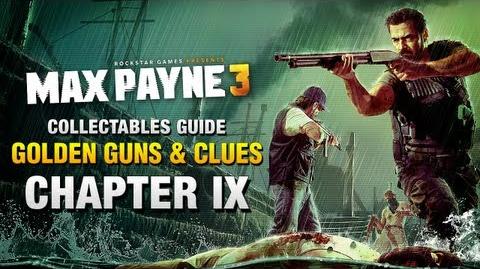 Retrieved from "https://maxpayne.fandom.com/wiki/Here_I_Was_Again,_Halfway_Down_the_World?oldid=29597"
Community content is available under CC-BY-SA unless otherwise noted.