""Fight and Flight" brings Max's story full circle, revealing more about his days as a young aspiring police officer, his early successes on the force, and ultimately to the events that led to his chance meeting with Passos in Walton's Bar during Chapter 4 of Max Payne 3."
―Max Payne 3 website 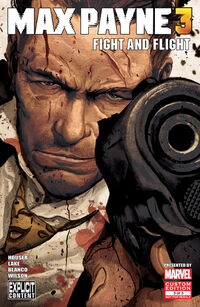 Fight and Flight is a Max Payne comic book[1], the third and final part of a three-part comic book series. This issue concludes the bridge for Max between Max Payne 2: The Fall of Max Payne and Max Payne 3. It was released on July 13th, 2012.[2]

Retrieved from "https://maxpayne.fandom.com/wiki/Fight_and_Flight?oldid=28814"
Community content is available under CC-BY-SA unless otherwise noted.