For the achievement in Max Payne 3, see It's Fear That Gives Men Wings.

"Gognitti would be moving fast. I don't know about angels, but it's fear that gives men wings."
―Max Payne

Fear That Gives Men Wings is the sixth chapter of Part I in Max Payne.

As he is outside, the stairwell has been destroyed by the explosion as well and the only way forward is traversing through the adjacent buildings on the rooftop. He goes downstairs to find junkies hanging in the fire barrel. Max soon enters a nearby building to find a back door to a laundry shop which is locked. The mobsters also refuse to grant entry which forces Max to enter another building.

Another building is filled with junkies and mobsters who Max kills as he goes more floor up but is stopped by a broken stair. He enters another room to find an unarmed mobster who Max uses to get in the laundry shop. As he is granted access, he kills all the gangsters in the laundry shop and proceeds upstairs. He enters an apartment room and kills a resident. Max watches news about his actions back in Lupino's hotel.

He exits to the roof and enters another building through the pipes and finds mobsters hanging around the abandoned building watching something. After passing through the building, he soon re-enters the tenements where he fights many of the mobsters. He reaches Lupino's office where Vinnie is scolding at his men. Max enters the office to confront Vinnie who starts to taunt and tries to shoot Max but Max manages to wound him. Vinnie soon runs away and let his men deal with Max.

Max neutralizes his attackers and before pursuing Vinnie, he finds a letter detailing Lupino's insanity and its effect to the business. Vinnie is the only one who knows where Lupino is, thus Max chases after Vinnie until they reach the roof where Vinnie escapes by jumping onto a passing train. Max soon follows Vinnie by jumping onto the following train.

On the PS2/Xbox version, this chapter is divided into four sub-chapters: The Alternate Route, A One Man War, A Citywide APB and Fear That Gives Men Wings.

Complete 'Part I Chapter 6: Fear That Gives Men Wings' on any difficulty 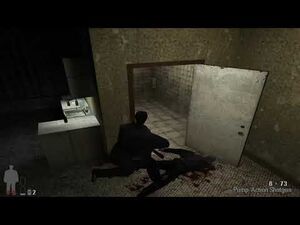