Max Payne calls this article a stub. You can help him by expanding it.
Template:MaxPayne3

Fabiana "Faba" Branco (nee Taveres) is the wife of Rodrigo Branco, a real estate mogul, living in São Paulo, Brazil. She is a big name on the São Paulo social calendar and often seen at gallery openings, fashion shows, and movie premieres.

Fabiana was born on April 24, 1985 in Lisbon, Portugal, to a Portuguese mother and Brazilian father. Her maiden name is Taveres. Fabiana has one sister, Giovanna. Her father, Orlando Taveres, is a dentist; her mother, Beatriz Taveres, a teacher.

In 1995, at the age of 10, Fabiana moved along with her family to Brazil. She grew up in São Carlos, about 230km from São Paulo. In 2004, at the age of 19, Fabiana moved to São Paulo. At some point between these two events, Fabiana spent one semester at university in São Carlos studying fashion but dropped out to pursue a modeling career. In 2005, she appeared as a MaxClean shower gel commercial. She later worked for six months in fashion PR in 2006. During her early twenties, she dated with many celebrities, such as soccer player Roque Cariano and actor Donato Escalda.

During 2008, Fabiana met Rodrigo Branco at a charity dinner, and the two got married in March 2009, in a 300-guest wedding in Ilhabela. Despite being married to Rodrigo, the two were not close, and Fabiana developed a close relationship with Rodrigo's younger brother, Marcelo, and the two became regular faces in the São Paulo party circuit. 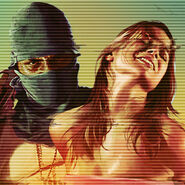 Artwork of Fabiana, held by a Commando Sombra member.

Fabiana in Club Moderno
Add a photo to this gallery
Retrieved from "https://maxpayne.fandom.com/wiki/Fabiana_Branco?oldid=18402"
Community content is available under CC-BY-SA unless otherwise noted.