"But everything had changed the moment those elevator doors opened to reveal Mona."
―Max Payne

Elevator Doors is the first chapter of Part I in Max Payne 2.

The chapter opens with Max revealing what happened to him after the conclusion of the Valkyr Case, with him being absolved of any misconduct (due to Alfred Woden's influence) and his subsequent transfer from the DEA to the NYPD as a Homicide detective.

Two years after Nicole Horne's death, Max hears a call come in from an NYPD dispatcher, saying shots were reportedly fired at a warehouse that belongs to his previous ally Vladimir Lem. Payne immediately takes the call and races to Lem's warehouse in order to investigate. Soon after Max arrives, he hears screaming and gunshots and he radios in a request for additional police units, then makes his way inside of the warehouse.

After investigating the first room of the warehouse, Max runs into a man who claims to work for the Squeaky Cleaning Company, and that he was hired to clean the place. Max questions him about the loud disturbances and the cleaner points out that there is a gun workshop upstairs. The detective directs the cleaner to show him the way and follows the man to the workshop, but as they make their way through the warehouse the cleaner pulls out a gun and begins to fire at Payne. Max takes the cleaner out before gunning down another killer who rushes to the aid of the first.

Making his way through the warehouse and up to the gun workshop, Max finds more cleaners but the workshop's storage area is empty. Going further into the workshop area, Max overhears Annie Finn pleading for her life to a couple of cleaners, saying that some "Mob guys" attacked the warehouse and that the cleaners were the ones to take them out. Payne announces himself but Finn is shot dead before he has time to attempt a rescue, so Max takes her killers down in addition to several others in the gun workshop.

When the rest of the cleaners in the workshop attempt to flee in an elevator, Mona Sax appears and takes them all out, and as Max also reaches the elevator Mona disappears behind closing elevator doors once again. He calls the elevator and takes it to the ground floor, killing the remaining cleaners and finding more bodies. Max runs out of the warehouse, shooting at a black van with the cleaners trying to escape. He is almost hit by the van but is pulled away by Detective Winterson.

At the station, Bravura scolds his detectives for failing to save Annie Finn and gives the case to Max while he gives Winterson a homicide case, Senator Gate. Payne looks at a photo of Sax, who is the prime suspect in Winterson's case, and when they walk back to their desks a nearby cop answers Winterson's phone which she snatches from him. The cop mocks her saying it's her boyfriend, and when Max gets to his desk he tries to find information on Kaufman, but is unable to find out anything on him or the cleaners. 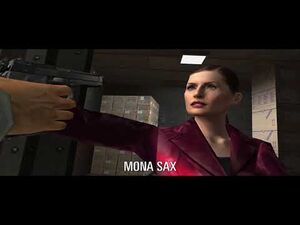