Russia
The Dragunov is a weapon featured in Max Payne 2: The Fall of Max Payne.

The Dragunov is a Russian type of a sniper rifle. It is less powerful, but a faster rate of fire than other rifles. It is the best sniper rifle for fast-paced situations.

The Dragunov is first introduced in the mission where you play as Mona Sax in the construction site, and you'll become an instant fan soon after. The Dragunov is a powerful gun, with a slow rate of fire, though fast compared with other long-range rifles. It also has a nice-distanced scope, however it is fixed, and nonadjustable. Recommended for everyone, because it has low sway due to heavy weight.

The Dragunov is arguably the better sniper rifle. Its damage is adequate enough to incapacitate enemies with one head or chest shot, and the force of the caliber knocks enemies who are not killed instantly off their feet. Its lack of Bullet-cam (present in the only other sniper rifle in the game) makes it a less disorienting rifle to use. Finally, it has a ten-round magazine compared to the sniper rifle's 5, making it

ideal for clearing out rooms.

When used without the scope, the Dragunov essentially becomes a Desert Eagle; accurate and powerful. This is an important fact for those who are ambushed from close quarters while sniping.

In the story mode, Max never has access to this weapon; it is exclusive to Mona and the enemies she faces. The only way for Max to use this weapon without cheats is in the level "Love Hurts" where after Mona drops it on the balcony, Max can throw grenades up there, causing the explosion to knock the weapon down. (It will only have 5 rounds in it)

Although named the "Dragunov", the gun itself is the Romanian PSL. This can be distinguished by the AK-shaped safety and large front trunnion.

Mona with the Dragunov.

Max using the Dragunov. Note that Max cannot use the rifle in the story mode. 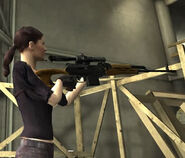