"I had a permanent, constipated grimace on my face. I was revenge personified."
―Dick Justice[1]

Template:CharacterInfobox Dick Justice is a fictional character and the protagonist of the Dick Justice crime television series. Besides appearing in the series, he also narrates its story, using metaphors often. The character is heavily based on the New York City Police Department Homicide detective Max Payne and his 2001 Valkyr Case. 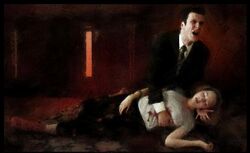 Retrieved from "https://maxpayne.fandom.com/wiki/Dick_Justice_(character)?oldid=23136"
Community content is available under CC-BY-SA unless otherwise noted.