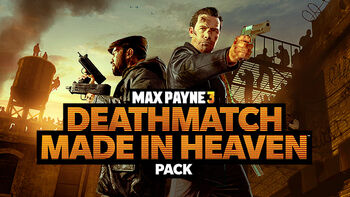 Deathmatch Made In Heaven is a piece of DLC for Max Payne 3. This was set to launch in October, 2012 on Xbox LIVE, PlayStation Network and PC, but was delayed until 22nd January, 2013.

Deathmatch Made In Heaven is the final piece of DLC for Max Payne 3.

Kill a player with the Bouncing Betty

Stun 10 players with the cattle prod or stun gun

Trigger and avoid a Bouncing Betty by Shootdodging

Retrieved from "https://maxpayne.fandom.com/wiki/Deathmatch_Made_In_Heaven?oldid=21872"
Community content is available under CC-BY-SA unless otherwise noted.