Deadly Force is a Max Payne 3 multiplayer burst. Its main function is to make the bullets of the player's guns do more damage, thus increasing the stopping power of weapons.

The best time to utilize Deadly Force is when you come upon groups of opponents clumped together, like in hallways or small rooms. Wait until you begin your attack to activate the Burst, since its duration does not last long.

The Deadly Force Burst can be rendered less effective if the player uses Big Dog to add more health to their character, or even by simply avoiding a Deadly Force user for the remainder of the Burst. 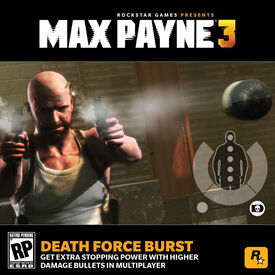 Deadly Force was a pre-order bonus, this can now be purchased on Xbox LIVE for 80 Microsoft Points or on PlayStation 3 and PC for $1.

For Max Payne 3 Rockstar Pass holders, this pre-order bonus is free of charge via the ingame marketplace option. DO NOT purchase this content from elsewhere or you will be charged again.

Retrieved from "https://maxpayne.fandom.com/wiki/Deadly_Force?oldid=26480"
Community content is available under CC-BY-SA unless otherwise noted.