Somewhere in the 1940's
The DeMarco Crime Family is an Italian mafia based in New Jersey. The Don of the family by 2012 is Anthony DeMarco. According to Max Payne, the Mafia's major business is drugs dealing. 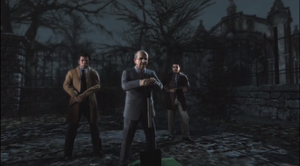 Nothing is known about the organization's origins. The DeMarcos were peripheral players during the 80s and 90s, working under the umbrella of the Punchinellos, but by 2003, due to the weakening of the Punchinello Crime Family for their involvement with the Inner Circle, they took advantage of the power vacuum. At some point prior to 2012, Anthony DeMarco became the Don of the Family.

In 2012, Tony DeMarco, the son of the Don, along with a few friends, enter Walton's bar and encounter the former NYPD detective Max Payne. They begin to tease him, though Payne remains relaxed and taunts the thugs back. Tony gets angry, thinking that Payne disrespected his family, and pulls an M1911 to the detective's head. Tony, however, is confronted by Raul Passos, who points a .38 Revolver at the mobster. Tony and his group exit the bar, but tells Payne and Passos that they will return.

A while later, Tony returns with his friends and confronts Max and Raul again. He hits a woman who was drinking with Passos. Max then takes a handgun and kills Tony. A large group of mobsters that were in the bar attack Payne and Passos, but they manage to escape and run to Max's place.

Some time later after Max leaves New Jersey, he spots a newspaper on a yacht in Panama, which states that the DeMarcos and Punchinellos have restarted their animosity towards each other and it has resulted in a turf war in New Jersey, particularly Hoboken.

Being an American crime family, the DeMarcos are not as heavily armed as the São Paulo gangs such as the Comando Sombra. The majority of DeMarco goons carry M1911 pistols, and otherwise typically carry M10 machine pistols and the occasional M4 Super 90 shotgun. A handful wield MPK submachine guns, and a single group of four or five of them are equipped with AK-47 assault rifles.

In the cemetery ambush, the DeMarco contract killers have a single sniper armed with an M82A1 sniper rifle in a tower, as well as a single hitman wielding a SPAS-15 shotgun from a balcony overlooking the main chapel area, and a single goon carrying a 6-shot Rotary Grenade Launcher used against Max and Passos shortly after both of them escape the van ambush. SPAS-wielding hitman has better-than-average reflexes and unfailingly ducks behind cover whenever aimed at by Max Payne, making it nigh (if not completely) impossible to kill said hitman, necessitating that Max flank behind him for a clear shot.