2012
Crachá Preto (Portuguese for Black Badge) was a Brazilian police militia (aka milícias) that operate in São Paulo. They are the secondary antagonistic faction in Max Payne 3 and considered well armed and equipped.

They considered themselves as vigilantes clearing crime in São Paulo, but they are just another criminal organization who acted more as a death squad and local mercenaries instead as their main crimes are usually extrajudicial killings towards both criminal gangs and political opponents.

In the organ harvesting scandal, Max Payne single handily wiped out the gang with their leaders, HQ and nearly all of the members, effectively destroying the gang.

The "Crachá Preto" (Portuguese for "Black Badge") gang bears this name because their officers use black operational tags on their uniforms to cover up their names and unit tags before committing their crimes[1].

The Crachá Preto is formed by Álvaro Neves and group of rogue police officers who started commit extrajudicial killings in under-policed areas in São Paulo. They are initially financed by members of the business community and other wealthy residents to eliminate thieves, drug dealers and other social undesirables. There have been allegations that Rodrigo Branco have hired them to clear some land so he could build the property in the area and they are responsible for killing 300 homeless people in 2008.

Since their formation, they have fought the favela gangs and take over the favela area from the gangs. They soon imposed their authoritarian rule by controlling water, electricity and cable supplies and extort the favela residents as "security taxes". There are sources that the militia have been moving into arms and drug trafficking along with political assassinations since 2009. In 2010-2011, they are believed to be responsible for 90 local politicians, judges, witnesses and community leaders, they also tortured 2 Spanish journalists attempt to investigate them and Human Rights organization believed the Cracha Preto is responsible for the missing persons cases from low income neighborhood.

The militia have close ties with high ranking officials and politicians like Victor Branco in Sao Paulo and suspected of influencing political campaigns through voter intimidation. They also known for their ruthlessness, cruelty and brutality as they have use torture against their enemies by castration, electric shock and asphyxiation and they dismembered, buried or burn their victims to hide their crimes and making victim identification nearly impossible. They are also accused of planting crime scene evidence and staging executions to look like gang killings in order to justify their brutality against their enemies.

Victor Branco is the Crachá Preto's employer who employ them to do his bidding without getting his hands dirty. They are usually pay in donation receipts.

Their latest job is to steal the ransom money between the Brancos and Comando Sombra for the ransom of Fabiana Branco in order to complicate the matters and justify the UFE use to eliminate the Comando Sombra to boost his political career. He also use this opportunity to weaken the Cracha Preto as he intended to eliminate them to tie up loose ends. As expected, Max Payne managed to kill many of its members with nearly 20% of their faction before accomplishing the mission. Next few days, Victor hired the gang to eliminate Max Payne in return for revenge for the stadium while secretly distract the security for an assassin to kill Rodrigo.

In 27th February 2012, the UFE traded with the Cracha Preto with people UFE have kidnapped along with Marcelo and Giovanna for the people used for harvesting the organs and necklaced Marcelo and Giovanna to justify the brutality. However, Max intervened and killed the militia's second in command, Milo Rego and rescued Giovanna while failed to rescue Marcelo. The Cracha Preto later tracked Max and Giovanna in the bus station thank to a police officer informant, but the militia suffered massive casualties in the attack with over 100 killed and wounded. Payne later inflitrated and attacked their headquarters, the Imperial Palace Hotel, and rescued their surviving prisoners before destroying the building, Passos kills Neves by shooting him in the head. Shortly afterward the organ harvesting scandal was exposed. With the destruction of their base and primary business, along with the death of so many of their members, including both their leader and co-leader, and the presumed arrest or escape of any surviving members, the Crachá Preto was essentially destroyed.

The members of the Crachá Preto are usually consists of ex-cops, soldiers, firefighters and prison guards, mostly men who experience with a gun and service. Some members came from the infamous UFE which explain the friendly relationship between the Crachá Preto and UFE and its involvement in the Organ Harvesting Case.

Unlike other criminal gangs in São Paulo, they have a standard uniform for identification. They usually wear a black or white shirt regardless sleeveless or not. They have flak jacket wear over them for protection in the gunfight and also extra ammo to carry. They also wear headset for communication between each squad.

They are also bald or buzzcut with Neves the only one with thick hair, possibly to hid from identification from the police as many members are usually people who are cops, soldiers, prison guards and firefighters.

Crachá Preto members are better equipped than members of the Comando Sombra; they rarely use pistols, and almost all members carry either full auto weaponry or shotguns. The majority of members favor the MD-97L assault rifle, alternatively they commonly carry either the MPK submachine gun or FAL assault rifle. Otherwise, they generally carry Micro 9mm or Auto 9mm machine pistols at a minimum. For shotguns, they usually carry the M4 Super 90 and occasionally the SPAS-15 or rarely the Super Sport. Those that do carry pistols generally use either the PT92 9mm pistol or the 608 Bull magnum revolver.

The ballistic vests worn by all Crachá Preto members gives them good protection, allowing them to survive several assault rifle bullet hits to the torso while only being staggered or knocked down rather than killed. However, unlike the UFE, they lack ballistic helmets and thus are vulnerable to headshots. Their limbs are also unarmored and vulnerable to damage.

Unlike most other gangs, the paramilitary Crachá Preto are equipped with frag grenades, and will often use them to flush out Max if he is dug in behind cover.

The gang also has at least two heavy soldiers wearing heavy full body armor suits and wielding LMG .30 machineguns. Their armor can withstand multiple headshots or up to a couple hundred bullet hits to the body.

Max Payne about to take down a member of the gang. 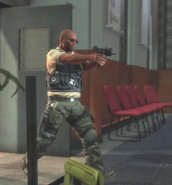 A Cracha Preto member opens a door and tries to kill Giovanna, only to get shot by Max Payne.