One day, Bicycle Helmet Girl is kidnapped by Maxwell's Demon and Captain BaseBallBat-Boy goes after the villain to rescue her, fighting his army of freaking zombie demons from outer space.

Initially, in the newspaper comic strips, the hero is depicted as being cocky and rude to Bicycle Helmet Girl, but, in the television series, he battles enemies to free her from her kidnappers.

Captain BaseBallBat-Boy is depicted as a boy wearing an extravagant superhero costume and wielding a baseball bat, which sometimes lights up in a green glow. He wears a red backwards-facing baseball cap, a domino mask, a white T-shirt with blue pants, a blue cloak and walks on red sneakers.

The boy seems to have super powers, inflicting significant damage with his bat. His special attack techniques have baseball-related names, such as "Fast Ball", "Foul Ball" and the ultimate "Grand Slam."

By 2003, various fan items have been created depicting the character, including statues, posters, real-life costumes, even bed sheets. Mobster Vincent Gognitti was known to be a huge collector of such merchandise.

Punchinello Crime Family mobster Frankie "The Bat" Niagara started using a baseball bat to beat and torture his foes after he became a fan of Captain BaseBallBat-Boy.

In 2011, Captain BaseBallBat-Boy's costume was released as an Xbox LIVE avatar item. There are male and female variants. Also, the head of the costume can be purchased individually. 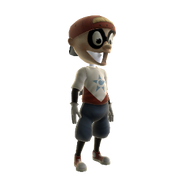 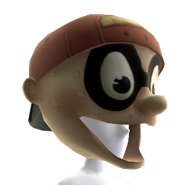