"Project Valhalla had not been the only thing the Inner Circle had been involved in. There were rows of cabinets full of files. The serpentine secret society went back a long way, always pulling strings from the shadows. I couldn't say I was sorry. Woden's move in some Byzantine power game had cut the Circle's membership roster to one. The old man wanted me on clean-up duty. It was my mess too."
―Max describing Alfred Woden's actions and his thoughts

Byzantine Power Game is the sixth chapter of Part III in Max Payne.

Max Payne finds himself in a room filled with filing cabinets linking the Inner Circle to hundreds of major crimes throughout the city. Max, realizing he has nothing to lose, decides to head to Aesir Headquarters, but first he must escape the Asgard Building.

He makes his way through the building, taking out every Killer Suit and mercenary in his way, while he looks for the exit. Soon he finds the meeting room, where he met the Inner Circle and exits into the entrance foyer where a few more Killer Suits and mercenaries armed with Jackhammers, Ingrams and Colt Commandos guard the exit. After an intense shootout, Max leaves the building.

On the PS2/Xbox version, this chapter is divided into three sub-chapters: Byzantine Power Game, Nothing To Lose and Clean Up Duty. 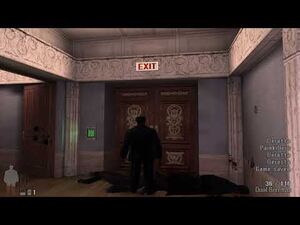