"What the hell does B.B. stand for anyway? Backstabbing Bastard?"
―Max Payne to B.B.

BB is the secondary antagonist in Max Payne. He is a DEA agent who revealed to be a mole for Aesir and responsible for the events that led in the game. Max refers to him as "a cowardly right-hand man", indicating he's Nicole Horne's lieutenant.

He and the Killer Suits are killed by Max Payne during a failed ambush attempt against him in the Choir Communication Garage.

"Alex and B.B. were my only contacts in the DEA -- the only ones in this decript city who knew I was down here."
―Max Payne.

Not much is known about his life prior to the events of the Valkyr Case. His real name is unknown, as "B.B." is more likely a nickname used by his friends and associates. B.B. is a member of the Drug Enforcement Administration, for which Max Payne is building the Valkyr Case. B.B. and his partner Alex Balder are the only DEA agents who were aware DEA Agent Payne had gone undercover. Facts suggest he is actually working for Nicole Horne's Aesir organization and acts as their spy in the DEA. If he was a spy for Horne, that may explain why it took three years to make progress in the case.[1]

"B.B. here. Something urgent has come up with Jack Lupino. You need to meet with Alex immediately at Roscoe Street Station."
―B.B. to Max, setting a trap for him.

In 2001, B.B. calls Payne, who was working undercover in Jack Lupino's crew, on the phone one fateful night and tells him to get to a meeting with his longtime partner and other DEA contact, Alex Balder, in New York City's Roscoe Street Station.

As the Valkyr Case was making progress, B.B. picked the time and place for the meeting to coincide with a massive Mafia bank robbery operation, with hopes that both key detectives would be caught in the heist and killed by scores of armed mobsters and goons roaming in the vicinity.

Moreover, the double agent shows himself in the area, armed with a Desert Eagle, and personally kills Balder, shooting him in the head when he is talking to Payne though a gate. He then runs away from the scene shortly afterwards.

At the time, Max doesn't know that B.B. was the one who killed Alex, as he was outside the detective's view. Max soon finds himself framed for this murder and pursued by the NYPD.

A few nights later, B.B. contacts Max in an attempt to lure him into another trap and kill him, this time suggesting they meet up at the Choir Communications Garage. As Max thinks about Alex's death, he slowly understands that it was more likely an "inside-job", finally understanding that B.B. has betrayed and sold them out.

Max arrives to the place and confronts B.B. at the carpark, and venomously nicknames him "Backstabbing Bastard". B.B. and his henchmen try to escape, but Max is able to chase them down and kill B.B.'s men one by one.

B.B. himself duels Payne after his escape car crashes and catches fire, making him abandon it. The traitor wields a Jackhammer in his last stand, but the powerful shotgun does not save his life -- B.B. is killed after a short gunfight with Max, and thus, Max avenges Alex's death.

"You're a bribe-taking bent cop who sold out his partner."
―Payne, regarding B.B.

B.B. appears to be always willing to avoid direct confrontation and fights whenever possible. He does not engage Payne at Roscoe Street and kills an unsuspecting Alex Balder facing only his back and unseen, opting to run away from the scene. B.B. also chooses to flee a meeting with Payne at the Choir Communications Garage, preferring to leave the fighting to his men.

Money was an important object in B.B.'s life, as he sold out his colleagues at the DEA to Aesir for substantial monetary gains: Max Payne notes the traitor is wearing expensive clothes and other attire, which would be beyond his salary as a DEA agent.

B.B. is a very tricky and distrustful person; he was able to fool both of his partners and friends, making them to believe that he is on their side and wanting to help them in their cause, while in reality, he actually slowed them down, waiting for an opportunity to strike both of them down.

He has a tendency to refer to Max as Maxey, probably to deceive him and come across as friendly.

B.B. was a tall man with golden-brown hair, though it is unknown what his eye color is, as he was always seen with black, round sun glasses.

He wears a large, expensive, dark coat on what is seen to be a blue shirt, and has a yellow tie. His outfit is completed by a pair of black pants and shoes.

In-game, his appearance is slightly different - he wears a brighter coat with a gray shirt and is portrayed to have a stubble.

B.B. is very capable with firearms, most notably his Desert Eagle sidearm and Jackhammer shotgun, showing himself to be very experienced with the latter during gunfights. Other than firearms, B.B. also showed that usage of thrown weapons such as grenades and Molotov cocktails, as was seen in his fight with Max.

Other than his weapons skills, B.B. also showed an ability of eavesdropping; coming silently during the conversation between Max and Alex, keeping himself out the view of his partners, killing Alex, and escaping from the scene before he was being able to be identified or chased by Max.

When killing Alex Balder, B.B. uses a Desert Eagle, instantly killing Alex with a single shot to the back. Later, during his final battle with Max Payne, B.B. wields a powerful Pancor Jackhammer automatic shotgun, with him and his men being the first opponents faced by Max to wield that weapon. He also carries a few Grenades, which he will throw at Max while chasing him. B.B. has very high health, much like Jack Lupino, Frankie Niagara, and Boris Dime, and requires about 65-70 Beretta 9mm pistol shots to bring down. He can be killed somewhat faster with the Colt Commando, and also dies after about 5 headshots with the Sniper Rifle or 3 direct hits from the M79 Grenade Launcher.

After his car crashes in the bottom floor of the parking garage, B.B. will emerge along with several Killer Suits. 3 of these bodyguards are also equipped with Jackhammers, while another dual-wields Ingram machine pistols. B.B. himself begins the fight crouched at the back corner of the garage level, from which he fires at Max with his Jackhammer. If approached by Max, B.B. will begin taunting Max while running off and attempting to flank around Max by climbing the wire fence behind him. At this point he continues taunting Max while aggressively chasing after him, starting out throwing a couple of grenades and then chasing Max down with his Jackhammer.

B.B. was voiced by actor Adam Grupper in the 2001 video game Max Payne. Grupper has appeared in many comedy films as either a supporting or minor character, as well he appeared in the famous TV series Law & Order in four different roles.[2]

In the game, other than B.B., Grupper also voiced a few Policemen and Mercenaries.[3]

B.B.'s character is a made a lot more prominent and significant villain in the Max Payne film than in the game. The motion picture turned B.B. into the main antagonist of the story instead of Nicole Horne, who herself remains only a minor supporting character. Hensley's death somewhat mirrors that of Horne's in the game's finale - he is killed on the Aesir HQ skyscraper's roof trying to flee in a helicopter. However, he does not die in a chopper mangled by a falling antenna which violently explodes and is sent crashing down from the roof and has supporting structures fall, crash and wreak destruction upon it. B.B. is simply shot dead by Payne with one bullet when standing and facing him.

B.B. is the boss of the Backstabbing Bastard chapter of Max Payne. He wields a Jackhammer and Molotov Cocktails and has around five soldiers guarding him. If the player gets too close to him, B.B. will climb over the wired fence and come back around to circle Max; Max can do this too. Using either a Colt Commando or the same Jackhammer on him is wise. Shooting him in the head works best because it will disgruntle him and he will temporarily stall. You can also throw some grenades on him while being in cover behind a car. One good way of killing B.B without wasting too much ammo and without taking too much damage is to shoot him with the beretta (only the single, not the dual) behind the blue van (the one you get close before the last 3 soldiers protecting B.B appears). This can be done due to the fact that Max shoot the single beretta with the right arm, so when you shoot the initial position of the bullets is a little more in the right than the other regular weapons, that makes possible to shoot with most of Max body hidden behind the van, protecting Max from B.B shoot (altough he can still be hit by the shoots of B.B the van will receive most of the bullets and the damage received is not really high). 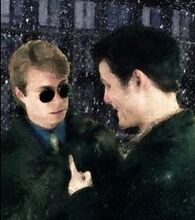 B.B. being confronted by Payne.