Killed by the Killer Suits

"Angelo Punchinello's the one who murdered your friend and framed you with it."
―Mona Sax to Max Payne.

Angelo Punchinello is the secondary antagonist of Max Payne and main antagonist in Part 2, A Cold Day in Hell. He is the Don of the Punchinello Crime Family and responsible for selling Valkyr to the street.

He is killed by the Killer Suits under Nicole Horne's orders cutting ties with the Mafia.

Not much is known about Angelo's backstory. It is unknown when he founded the Punchinello Crime Family or if he got leadership due to a family connection.

At some point he married to a woman Lisa, the twin sister of the hired gun Mona Sax. He was strongly disliked by Mona, due to him using violence against Lisa, described as a "sadistic wife beater" by Mona.

At some point prior 1999, Angelo was connected to Nicole Horne, who used his crime family for her Valkyr business and tests, which also addicted Angelo's right-hand man, Jack Lupino. Angelo never realizes who Horne really is, but thinks she is someone from the government.

In 2001, after bailing out hitman Rico Muerte from the "Chicago incident", Angelo, as a repay, sends his hitman to assassinate the mayor of New York City. Rico, however, never did the job, as he was killed by a fugitive detective.

The same year, Angelo becomes involved in a gang war with the Russian mobster and arms dealer Vladimir Lem, and his Russian Mob. One of Vlad's men, Boris Dime, decides to side with Punchinello's crime family, and supplies him weapons with his ship, Charon. Vladimir himself, in an act of revenge, blows up one of Punchinello's fronts, Lupino's tenement building, after Vincent "Vinnie" Gognitti, one of Angelo's men, as well a Capo for the family, wrote in a letter that Vlad has no guts for action against them. Vinnie also wanted to send a letter to Punchinello, telling him about Lupino's latest actions of killing one of the family's soldiers, Dino, but was never able to finish the letter.

Punchinello, angry at Lupino for killing one of their soldiers, Dino, just to see how his remains will look like on a wall, sends a letter to his underboss, telling him that he should maintain his composure, and if not, he would send The Trio to pacify him. Max Payne later finds the letter, torn apart at Ragna Rock.

In 2001, due to personal reasons for the abuse of her sister and also hired by Horne, Sax is sent after Punchinello to kill him. Max Payne, who killed Lupino, decides to hunt Punchinello too, after being told by Mona that Angelo is the one who killed Alex Balder, Payne's partner, and framed him for the murder.

Under the orders of Punchinello himself, Frankie Niagara, a feared hitman trusted by Punchinello, captures Payne and takes him to the basement of Lupino's hotel, torturing him. Payne is able to escape and kill Niagara, after the latter went to get a drink. Punchinello also manages to have the radio news say that Payne is deceased, as a "reliable source."

Payne later makes a deal with Lem; if Payne will kill Boris Dime, Lem will give Max firearms against Punchinello. Max indeed attacks the Charon, Dime's ship, in order to find the traitor. During the chaos, Punchinello tries to connect with Dime, only to hear Payne taunting him.

Punchinello later tried to lure Payne into a trap. Payne tried to set a meeting with Punchinello, who gives him one hour to arrive to his restaurant, Casa di Angelo.

The meeting is revealed to be a trap, with Punchinellos goons burning down the restaurant in order to lock Payne inside in the hopes that he will die. The trap does not succeed, as Payne is able to escape the burning restaurant. Payne then flees the scene with Lem, who gives him the firearms he needs.

Battle at his manor and death[]

"No! I told him nothing..."
―Punchinello's last words, before being gunned down.

Payne decides to attack the Punchinello Manor in order to kill Angelo once and for all. He finds out that the manor is heavily protected, including the Trio themselves acting as guards. Payne later finds Lisa's corpse, likely killed by Angelo himself.

Despite being outnumbered, Payne is able to kill Punchinello's guards, including the Trio. After killing every guard who protected Angelo's office, Payne enters the room, where Angelo was on the phone with someone, asking for help.

Punchinello is then confronted by Payne at his own office. He begs for his life, and states that he only does what he was told to do by his government contact, though Payne kept aiming his gun at Punchinello's face.

Just then, a few suited well-armed goons stormed into the office. Punchinello tells them he said nothing to Payne, but is gunned down by them.

"Now, with Lupino and Punchinello himself long gone, they were a bunch of schmucks without the delusions of grandeur that too much money...too much power...and not enough brains God will give any idiot."
―Max Payne, regarding the Punchinellos' status.[1]

Angelo Punchinello's death was the most horrible loss to the Punchinello crime family. His death severely weakened the crime family in 2001, along with the deaths of Lupino and the Trio earlier. A man known only as the Godfather took control over the family, with Gognitti becoming an underboss.[2]

After 2003, the Punchinellos were brought to their knees, with most of the surviving members having been arrested during 2003-2012.[3][4] This left an open door for the DeMarco Crime Family.[5]

"Punchinello was a pushover."
―Max Payne.

Angelo Punchinello is a cold, easily-angered, violent, and sadistic person, who rules his crime family with an iron fist. Behind his all men, Angelo is a confident, calm-yet-easily-angered man, who does not despise certain actions to get what he wants. He is hot-tempered man, getting angry rather easily during the few talks he had with Max Payne, who often teases him.

Angelo's real persona is actually a coward, a helpless man, without his men. When he sees that he has no way out, he begins to pathetically beg for his life, only to get a few more minutes. He even tries to run away if this does not succeed.

Angelo Punchinello is a medium-sized man with graying-brown combed hair and dark-colored eyes. He wears a dark blue suit, with a white shirt under his blue jacket, as well having a grey-black-white tie. He wears black shoes.

Notice:In the Graphic novel, Punchinello's suit and hair colors are darker, with his suit looks more like a black suit.

In the 2001 Max Payne, Don Angelo Punchinello was voiced and, possibly, motion captured by actor Joseph Ragno. Ragno played in a few minor roles in films and TV series, such as Joey Sanderson in the TV series The Commish. Similar in many in his works, Ragno is credited as Joe Ragno, rather than Joseph.

Other than Angelo Punchinello himself, Ragno also voiced a few other members of the Punchinello crime family. It is unknown if Ragno returned to the 2012 Max Payne 3 to voice once again his character in the multiplayer mod of the game.

Angelo Punchinello features as a playable character in the multiplayer character model of Max Payne 3, available to use during deathmatch rounds; single-deathmatch where every player is for himself, and Team-Deathmatch, Payne Killer, and Gang Wars if the player plays as the Punchinellos.

Punchinello is unlocked once the player reached level 48, making him the highest-leveled multiplayer model to unlock, not including Max Payne. It is also worth noting that Angelo, besides Max himself, is the only multiplayer character to appear from previous games that is not part of the Classic Character Pack. 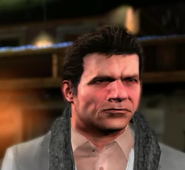 Punchinello as a multiplayer character in Max Payne 3.