Prologue (A Bit Closer to Heaven)

A Vortex of Green Blood (PS2)

"The Devil was the master of the house, and Death was me, coming for him."
―Max Payne commenting the tarot cards.

Angel of Death is the fifth and final chapter of Part II in Max Payne.

After escaping an assassination attempt from Angelo Punchinello, Max takes the fight to him and his men by entering the Punchinello Manor premises and finding that someone has killed the guards and left the cellar door open.

Max shoots his way from the wine cellar to the kitchen and dining area where he runs into the first of The Trio: Pilate Providence. Max kills him and carries on through the mansion until he comes across Joe Salem and kills him too. After surviving a mobster who tries to take Max out with a grenade launcher, he finds Lisa Punchinello dead and shortly after, gets a call from Alfred Woden warning him about a squad of armed men descending on the manor.

Max finally finds and kills Vince Mugnaio, and confronts Don Punchinello, but then the Killer Suits arrive and kill Punchinello. Max shoots a few of them but is soon outnumbered and confronted by Nicole Horne. After taunting Max she injects him with a large dose of Valkyr, and as he starts to react to the effects of the drug, Part II of Max Payne concludes.

On the PS2/Xbox version, this chapter is divided into three sub-chapters: Murderous Hearts, Angel of Death and Trouble on Dagger Heels.

Complete 'Part II Chapter 5: Angel Of Death' on any difficulty

Finish Part II in under 1 hour

A Cold Day in Hell

Complete Part II on any difficulty 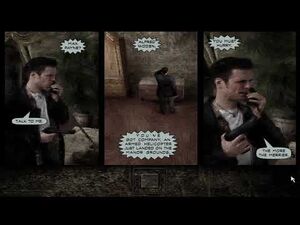