"I'm going to make you an offer you can't refuse... I've always wanted to say that."
―Lem offering a deal with Max in the previous chapter.

An Offer You Can't Refuse is the second chapter of Part II in Max Payne.

After escaping from Lupino's Hotel, Max runs into Vladimir Lem, who needs Max's help in exchange for some firepower. Vlad's plan is for Max to reclaim his cargo ship, the Charon, whose crew have pledged their allegiance to the Punchinello Crime Family. The ship is stocked with a large variety of weaponry, and Vlad promises Max to have as much of the arsenal as he desires, so he can later storm the Punchinello Manor.

Max is dropped off at the docks of the Brooklyn riverfront, where he then proceeds to kill the guard at the gate and enter the premises. He makes his way through many warehouses and alleyways of stacked shipping containers, until he reaches a closed off bridge leading to the next section of the dock.

After searching a shipping container, he finds a sniper rifle, and evidence of a hit on the Mayor of New York City. Max makes a truck trailer roll into a raised bridge to crash into and lower it. After climbing across and getting into the next warehouse, the next chapter is triggered: With Rats and Oily Water.

On the PS2/Xbox version, this chapter is divided up into three sub-chapters: An Offer You Can't Refuse, Cold and to-the-Point and Family Troubles.

Complete 'Part II Chapter 2: An Offer You Can't Refuse' on any difficulty 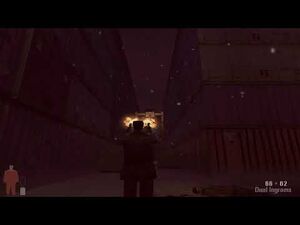