Prologue (A Cold Day in Hell)

"But who was I to talk, a brooding underdog avenger alone against an empire of evil, out to right a grave injustice."
―Max describing his own cliche

An Empire of Evil is the last chapter of Part I in Max Payne.

Max enter a room which reveal to be where Lupino perform occult rituals to any evil beings. These are evidence that Lupino under Valkyr influence gone crazy and not in a stable mind. Max found a torn note with the boss asking Lupino to have his mind straighten up or sent the Don's infamous hitmen, the Trio to deal with him. After inspecting the room, Max head forward to confront Lupino who is in the building attic, screaming nonsensical messages to his 'masters'.

As Max enter the room which is like a hall for any dark ritual, he is trapped with many Lupino bodyguards attempt to kill Max but failed. After clearing a wave of Punchinellos, Lupino revealed himself with his 2 remaining bodyguards. He spout the message that haunt Max, 'The flesh of fallen angels' before he talking nonsense and attempt to kill Max. However, Max able to kill Lupino despite his induced Valkyr state which gave him great endurance.

Despite his death, Max continue to shoot Lupino corpse to make sure he is guaranteed dead after seeing what Valkyr does. Suddenly, Max is met by a lady who mentioned that Lupino is dead, holding a pistol before pointing at Max.

On the PS2/Xbox version, this chapter is titled Straight from a Bad Dream.

Complete 'Part I Chapter 9: An Empire Of Evil' on any difficulty

Time to Die I

Finish Part I in under 1 hour

Complete Part I on any difficulty 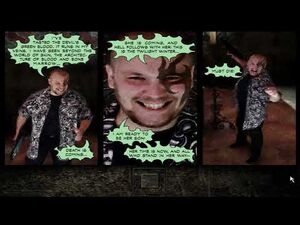