"Come on, Max. The fine and noble degenerates of this town are not going to catch themselves."
―Alex Balder to Max Payne, the mid 1990s[1]

Alex Balder is a supporting character in Max Payne and Max Payne 3 comics. He is Max's partner in the war against Valkyr and Punchinello Crime Family despite the difference in their careers.

He is killed by BB in setup meeting in Roscoe Street Station and his death led to Max status as fugitive and his path of rampage against the Punchinellos.

Most of Alex's early life is unknown. At some point before the mid-1990s, Alex joined the New York City Police Department. Before or during that time, Alex met Max Payne, and the two soon became partners and best friends. By the mid-1990s, the two already investigates the Punchinello Crime Family. On one occurrence, the two oversaw a drug deal and rushed to arrest the dealers. Alex was caught in a gunpoint but was saved by his partner.[2]

Sometime prior to 1998, Alex moved to the Drug Enforcement Administration and became one of its agents. He became interested in having Payne transfer out of the NYPD to help him with undercover cases, but his friend declines his offer, citing his willingness to spend more time with his family.

On August 22nd, 1998, Balder tried once again to recruit Payne to the DEA, but Max refused again. Max also revealed that he will stop smoking, as the smoke is bad for his baby daughter, leading Alex to say that Max is a "real boy scout". Before leaving, Max is asked by Alex if they will still play poker that Thursday night, which Max responded positively. Max returned to his home, discovered his family murdered by Valkyr Junkies.

Soon after the violent deaths of his wife and daughter, Max decided to transfer to the DEA. For three years since then, Payne and Balder keep tabs on Jack Lupino's Valkyr trafficking and build a case against him. By 2001, Max went undercover to find more clues on Lupino's involvement with the Valkyr drug, and Alex did not meet him face to face until the Roscoe Bank Robbery in the same year, during the winter.

In 2001, one stormy winter night, Balder and Payne are set up by B.B. to have an urgent meeting at the Roscoe Street subway station, located in the Bronx, New York City. The two find themselves in the middle of a bank robbery executed by associates of the Punchinello Crime Family. Soon after they meet up, Balder is shot and killed by a hidden assassin, later revealed to be B.B. himself. Payne is soon framed for Balder's murder and is forced to run from the police; his best friend's death also triggers the start of his fevered revenge vendetta against the mobsters.

"Alex Balder was my partner and best friend."
―Max reflecting his life with Alex, 2012.

Balder's death heavily affected Max. According to Max, Alex had helped him remain sane after the murder of his wife and daughter. The police believe that Max killed Balder, and started a manhunt after him. A few nights later, B.B. tries to set a trap to Payne. Payne understands that B.B. was the one who killed Alex and therefore selling both of them out, then leaving him to confront the traitor, and kills his men prior to killing him in the process avenging Alex. Raul Passos asked Max about Alex in 2012 in Walton's Bar Max mentioned how Alex was his best friend.

Balder's last name could be a possible allusion to Baldr, the Norse god of light and peace. In Scandinavian mythology, Baldr is killed by his blind brother, Hod, after Loki, the God of Mischief, persuades Hod to throw a dart of holly at Baldr. Baldr's death shares many similarities with Alex's death in Max Payne. Balder's last name could be also a reference to the fact that he is indeed bald or at least, balding.

"What the hell is going on? There's more corpses here than at the city morgue."
―Alex Balder[src] 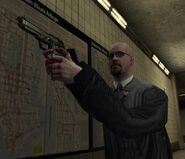