"Look man, give yourself up and DeMarco might have a change of conscience, huh... Might grant you once last reprievement, ain't no reprievement gonna be found otherwise."
―A DeMarco goon holding Passos hostage while telling Max to surrender.

Ain't No Reprievement Gonna Be Found is the eighth chapter in Max Payne 3.

The level starts with Max putting down some flowers on his wife's and daughter's grave, with Passos standing next to him. Passos then says that he will meet Max down the hill after Max is done. Shortly after Passos leaves, three DeMarco assassins approach Max. One of them asks Max if he is Max Payne. Then, without any answers, the assassins open fire as Max takes cover behind his family's tombstone. Max then fights his way down the hill to reunite with Passos, after which they head through a gate. Just then, they hear a car heading straight towards them at a high speed. Max then takes aim at the DeMarco driver and kills him, resulting in the car colliding with and collapsing the gate.

Afterwards, Passos and Max proceed to the next part of the cemetery where they encounter more DeMarco men, one armed with a grenade launcher. After Passos and Max takes care of them, they go through another gate and see a group of parked cars, and DeMarco troops arguing how to split the bounty on Max's head. The argument quickly ends as Passos sneaks up on them and shoots one of them dead as he is spotted. Max at this point attacks them from above and wipes them out, while Passos proceeds alone to the other part of the cemetery, where he gets captured. Max hears that Passos has been captured through the radio in one of the cars, and that the person that has him has no idea of his identity.

Max then makes his way to the other part of the cemetery after battling some DeMarcos, where he finds Passos being held at gunpoint by a DeMarco goon who is confused as to who Passos is. The goon realizes the person who just came in is the real "Max Payne", as he is ordered to shoot him. While Passos is held at gunpoint, the goon then tells Max to surrender so the "DeMarco might have a change of conscience". Max quickly shoots him, but more DeMarco soldiers show up to kill Max and Passos. The pair massacre them and proceed to the next area, where they encounter Greg, a hapless graveyard worker who is frightened and confused by the gunfire engulfing the cemetery. As Passos tries to calm him down, a laser sight appears and Greg is shot in the back of the head by a sniper entrenched in the mausoleum. Max and Passos then proceed to the building while taking cover behind tombstones. Passos distracts the sniper while Max closes in, killing other DeMarco hired guns as they pour out of the building. After Max kills the sniper, Passos and he enters the mausoleum where they are ambushed and disarmed by a group of DeMarco goons.

The goons escort the duo to Anthony DeMarco, the leader of the DeMarco Crime Family, who then berates Max for killing Anthony's son. As Max apologized for Anthony's loss, Passos also offered his condolences, but in the same breath stated that Anthony's son had started the fight and got himself killed. An enraged Anthony then hits Passos in the head with a shovel and then falsely accuses Passos for killing his son with racial slurs. Anthony then orders Max to dig his and Passos's graves before his overflowing emotions overwhelm him, the sobbing DeMarco elder then walks away while being escorted by two of his guards, leaving both Payne and Passos for dead.

While Max Payne digs with three guards holding them at gunpoint, he picks up some dirt with a shovel and throws it into a DeMarco guard's face and then hits another one in the head before picking up his gun and shooting him. Passos takes the dazed guard's gun, kills him and wounds the third. Shortly, after battling more DeMarcos and heading through a morgue, they continue upstairs where they find themselves within a church. At this point they get ambushed and proceed to make a stand. Above the pews, a thug with a shotgun opens fire, with neither Max nor Passos able to get a bead on him. Max proceeds upstairs to flank and take out the thug. Equipped with an automatic shotgun and a vantage point over the church, he eliminates the remaining DeMarcos coming after Passos on the floor below. A victorious Max and Passos then find an office and a landline. Passos uses the phone to call for backup in order to get out of New Jersey. 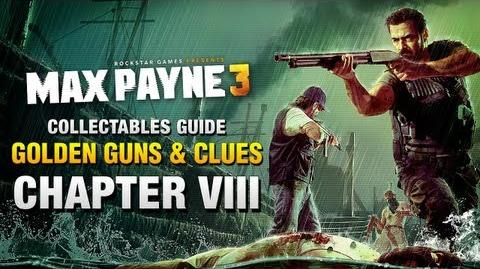