Address Unknown: Descent to Madness is a dilapidated funhouse based on the cancelled TV show Address Unknown on Coney Island, New York City in 2003. The series' cancellation in the mid-1990s brought about its closure. It is the base and hideout of Mona Sax, who has an apartment on the site.

Since the funhouse was based on Address Unknown everything inside is related to that show from the locations to cardboard characters and the interior has been designed to reflect the story of the main character.

The main entrance to the funhouse consits of turnstiles and ticket booth where the customers could purchase the tickets to visit the funhouse. From there there's a tunnel entrance into the cardboard version of Noir York City from the show with moveable cars, sounds of traffic and people chatting and visible cut-out characters appearing and disappearing in the windows with "murdered" people cutboards around the corners and the apartments with quite large amount of blood. This part represents the main character John's first visit in Noir York City hence the appearance of normal-looking city but with some brutality and suspense as John saw many murdered people and binoculars blinking in the windows.

After the Noir York City part, the visitors must use the elevator to ride downstairs into the basement which serves as "The Pink Bird Mental Insitute" part. In this part the visitors explored the mental asylum with cartoon characters resembling mental patients, Rorschach test images with words "psychotic" or "insane", sounds of screaming mental patients, cells and torture rooms resembling examination rooms. There's a bathroom with pink flamingo in it moving exactly where the visitor is standing and the shower that fills itself with bloody water. This part represents the main character John's forced "stay" at "The Pink Bird Mental Insitute" hence the appearance of insane asylum and mental patients. John witnessed John Mirra in the bathroom mirror as well as the pink flamingo. He must have escaped from the fake doctors that were drugging him and tried to kill him but he managed to kill them and escape.

After "The Pink Bird Mental Insitute", the visitors must use the elevator to ride upstairs into the ground level which serves as "Twisted Noir York" or "Next Level" part. In this part the visitors explored the twisted version of the city that had many sinister looking building resembling laughing faces, with orange sky, spiky lamposts and cardboard bodies on the streets. At the end of this part there is a telephone booth that leads to the end of the tour. This part represents when the main character John escaped from the asylum and became John Mirra or even has been him all the time. However, at the telephone booth John answered the phone in which John Mirra spoke to him and welcoming him to the next level.

After the black corridor the visitors enter a hallway with many signs and plates saying "There Is No Escape" that change into arrows pointing at "Escape" that leads to the exit door from the funhouse.

The backdrop of the funhouse feature large spaces filled with props and other objects that didn't make it to the funhouse part or were simply multiple copies of one prop that have been hold to replace the old ones. There were also catwalks that allowed to move on the upper parts of the city parts of the funhouse or the basement level with power station to regulate the power in the building. Additionally, there were stairs that lead to workers room where the funhouse workers lived that had bedroom, living room, kitchen and shower room. After the building was abandoned Mona taken over this room and made her apartment there as nobody would suspect that she lived inside the abandoned funhouse.

Max Payne meets Sax here in order to find out who wanted them killed, before leaving for the Upper East Side apartments to find Corcoran. During Max's first visit at the funhouse, the entire machinery and sound recordings of the building are still working despite the abandonment and state of neglect.

Later, after Max's precinct is bombed and Sax escapes custody, Payne finds her at the funhouse and they begin kissing passionately before being interrupted by the Cleaners, who stage an assault on the location. After successfully repelling the attack, Payne jumps in the back of one of the Cleaners' vans and infiltrates their base at the Castling Construction Site, whilst Sax follows suit. During Max's second visit at the funhouse it is clear that the cleaners are destroying the funhouse machinery to stop Max's movement.

Payne returns to the funhouse with the mob underboss Vinnie Gognitti who is trapped in a Captain BaseBallBat-Boy suit rigged with a bomb, and as they were unable to disarm it, the detective hopes that Sax could help. However, they are met at the funhouse by Vladimir Lem, surrounded by armed guards and holding the remote detonator of the suit's charges.

Threatened to be blown up with Gognitti if he does not comply, Payne surrenders and is taken at gunpoint to Sax's living quarters. Stating that Payne would never let go of his pursuit for revenge, and to avenge the death of his mistress, Det. Winterson, the Russian mobster shoots Payne in the head, blows up Gognitti and leaves.

Whilst the funhouse catches fire, Mona Sax runs into the burning building to save Payne and resuscitates him. Although Sax tries to dissuade Payne from going after Lem to Alfred Woden's manor, they still leave the funhouse for their final battle with Lem. When Mona returned to the funhouse to save Max after Vlad detonated the bomb, the entire building was set on fire, the pathways were blocked by falling debris or fire and the sound recording became incomprehensible due to intense heat. 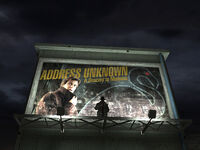 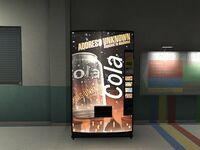 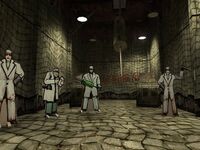