Address Unknown is a TV show which originally aired in the early 1990's. Its story revolves around John, a man who is continuously tormented by a murderer named John Mirra.

The story is set in a fictional city called Noir York City – an obvious play on New York City. The main character, John, explores the city in constant paranoia, explaining that he feels like he's being watched. John is portrayed as a man who has been apparently framed for the murder of his girlfriend by a serial killer named John Mirra.

Announcer: This week on Address Unknown...

Man: I don't want to go there. It's the last place I'd want to end up. But that's where I always end up anyway. Only, it's not me talking to the Pink Flamingo, but someone who looks the part down to the finest detail, except that he's evil. I'm hiding in the shadows, watching it all unfold.

Man: The Flamingo speaks. It can speak here. It says:

Man: That's "Mirrors are more fun than television." Somehow I know this, just don't ask me how.

[Evil laugh in the background]

Man: And I — not me, but my double — nods and smirks at this like it was the funniest thing in the world.

[A painful-sounding scream starts in the background]

Man: And then something goes wrong. And suddenly they know I'm there, hiding behind them and they both turn to look at me with cold eyes. And the Flamingo speaks again:

Man: I have no idea what that means.

[A long scream starts in the background]

Man: And, that's when I always wake up to my own scream, in that bright-lillied white hospital room, strapped to my bed.

John: I was trapped in a nightmare. My evil double had taken my girlfriend. Following him, I had somehow slipped into a twisted alternate reality, Noir York City. My double was John Mirra. He was the devil incarnate, a fallen angel.

John: He was a serial killer. He had framed me for his murders. I was hiding in a cheap motel. One night, I woke to a knock at the door. Someone slipped a note under the door. It was a clue. I descended into a mystery, desperate to catch him, to find my girlfriend, to save her. A labyrinth of my double's making, from one grisly murder scene to the next.

Announcer: Welcome back to our Return to Sender marathon, two days and two nights of the 90's cult series, Address Unknown, all the episodes in a row, a real descent into madness.

John: I was lost in the streets of Noir York. The city had swallowed Mirra and my girlfriend. I was part of some elaborate game, complex for it's own sake.

John: Every time I looked over my shoulder, I saw a shadow disappearing behind the corner, or the glint of binoculars in a window. They were spying on me, following my every move. When Mirra killed again, the map of the city changed.

Like a shifting glacier, a new crack appeared with every gunshot. I had abandoned all conventional methods of navigation. I was following the bloody signs he kept cleaving me, and he was watching me do it.

Announcer: The next episode of Address Unknown, right after the break in our Return to Sender marathon.

John: Wherever I went, the pay phones started to ring. Finally, I collected enough courage to answer one.

Girlfriend: John? You must run. He is coming after you. He wants to catch you. They are closing in. John, I love you. Don't give up. [She hangs up]

John: I wasn't going to give up on her. I could hear her voice in my head wherever I went, guiding me. I traced my double to a classy uptown nightclub. 'Pink Flamingo'. It was happy hour, they were serving Flamingo cocktails. Somehow the Flamingo was tied to my double. A stripper in the bar looked just like my girlfriend. Mirra's men had found me. I ran.

Doctor: Stop him! There he goes! Stop him! You can't escape! We're coming to take you away! You have nowhere to run!

John: Mirra was an influential figure in Noir York. His men chased me. They wore white uniforms. They looked so clean. They chased me in black vans with the logo of the Flamingo on them. I ran.

John: Mirra's men had caught me. Their black van took me out of the city. The countryside was sickeningly pretty: The sun setting on a sweet summer day, rain sparkling on grass, birds in the trees, children playing. The Pink Bird Mental Institute. Mirra's men pretended to be hospital wardens.

John: They said I was an escaped mental patient.

Doctor: Diagnosis: Paranoid Schizophrenic. You are insane, psychotic. You have to eat plenty of pills to get better.

John: They lied that I had killed my girlfriend. John Mirra came to mock me in the bathroom mirror.

John: The flamingo was with him.

John: Mirra claimed my girlfriend had turned evil, joined him.

Flamingo: .shE haS dyeD heR haiR reD [Backwards-speech played forwards]

John: I smashed the mirror. I'd kill them all.

Doctor: You have a tumor in your brain. It's making you mad. We're forced to operate... [Whir of drill] aggressively.

John: The fake doctors were trying to confuse me, saying I was John Mirra, pumping me full of drugs.

[He steals the drill from the doctor]

John: I was in charge, but still woozy from the drugs. I had to escape. I couldn't let them stop me.

Other patient: The flesh! The flesh! Aghh! [Sound of drill being used]

Announcer: The mind-bending finale in our Return to Sender marathon. The last episode of Address Unknown ever.

John: The poet Pool, in his poem "Somebody's been wearing my face again" wrote: 'In this hall of mirrors/Built by liars, I am a pale reflection of myself.' I had escaped from the Pink Bird Mental Institute. I was lost in Noir York City. I couldn't find my way back home. John Mirra had made me a killer.

John: I had become him, John Mirra, maybe I had always been him.

[He picks up the phone]

John Mirra: This is John Mirra. Welcome to the next level. 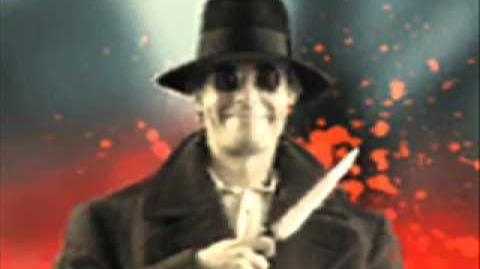 Add a photo to this gallery
Retrieved from "https://maxpayne.fandom.com/wiki/Address_Unknown?oldid=29635"
Community content is available under CC-BY-SA unless otherwise noted.