On a Crash Course

Dearest of All My Friends

"The whole neighborhood was a battle zone and a mob-war between Vlad's men and Vinnie's mobsters."
―Max explains the situation in this chapter.

A Mob-War is the third chapter of Part III in Max Payne 2.

Max, using a Squeaky Cleaning Company van to get to Vinnie Gognitti's place, is spotted by Gognitti's men who have set up a roadblock. They shoot at the van until it crashes into a nearby shuttered deli. Max staggers from the wreckage and makes his way through the tenements connected to the deli, killing Cleaner commandos who go to investigate the wrecked van. Max then begins working his way through the semi-abandoned tenements, finding himself in the middle of skirmishes between mobsters and Cleaners.

Eventually, Max goes through a door and on the other side are three mobsters who mistake Payne for one of their own. Max takes the opportunity to use the three as back-up while the Cleaners storm Vinnie's used-car lot. The group heads outside, walking down the street towards the car lot while Cleaners come out of the alleys and over fences to confront them. The mobsters and Payne take them all out and once they meet up with another mafioso, he tells them that Max is a cop; Payne has no choice but to defend himself against his former (albeit deceived) allies.

Max goes through a nearby alley to finally reach Gognitti's car lot: Vincent's Sweet Deals on Wheels. Before Max can cross the road to the lot a Cleaner van pulls up and several Cleaners get out. Payne takes them down and climbs over the perimeter wall into Vinnie's car lot, he then crosses the lot and goes through the nearby door. Once inside the building, Max looks around until he comes across Vinnie Gognitti, who is visibly distressed and stuck inside a large Captain BaseBallBat-Boy suit.

On the PS2/Xbox version, this chapter is divided into two parts: Chapter Three: A Mob-War and Chapter Three Continued... 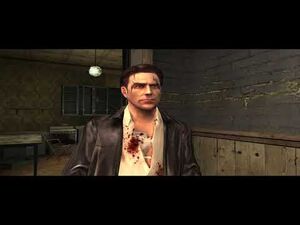