Dearest of All My Friends

"It's a losing game, without passion you are already dead."
―Max Payne

A Losing Game is the fifth chapter of Part III in Max Payne 2.

Mona Sax is on a nearby roof and as she gets Vladimir Lem in her sights with her Dragunov, Lem detonates the bomb within Vinnie Gognitti's Captain BaseBallBat-Boy costume. The explosion causes the Address Unknown funhouse to go up in flames, and instead of going after Vladimir, Mona heads into the building for Max. She dives through flames into the front entrance and heads deeper into the funhouse, avoiding debris as portions of the building explode or give way due to the intense heat. As the explosions intensify, parts of the building crumble to reveal openings in the walls, and Mona uses the destruction as shortcuts to get through the building quicker.

Mona continues to work her way through the burning building, using the fire alarm as a way to set off the building's sprinkler system and contain the fires enough to get through the room. Sax then has to contend with several overloaded electrical generators, and once she restarts the power the path leading upstairs is accessible. Once she gets up the staircase and past some debris, Mona comes across the remains of Vinnie Gognitti and his suit, then heads up the nearby metal stairs to her apartment. Mona reaches her apartment and sees Max on the ground, bleeding and seemingly unconscious. Sax then begins giving Max CPR, and the chapter ends as she attempts to revive him. 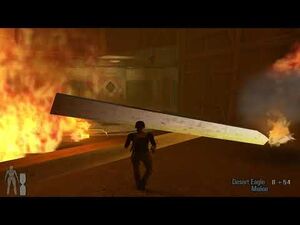 Retrieved from "https://maxpayne.fandom.com/wiki/A_Losing_Game?oldid=29758"
Community content is available under CC-BY-SA unless otherwise noted.