A Linear Sequence of Scares

A Linear Sequence of Scares

"A funhouse is a linear sequence of scares. Take it or leave it is the only choice given. Makes you think about free will: have our choices been made for us because who we are?"
―Max Payne

A Linear Sequence of Scares is the sixth chapter of Part I in Max Payne 2.

Max learns that the address Mona had given him over the phone belongs to an abandoned funhouse based on the cancelled 90's TV show, Address Unknown. As Max walks through the funhouse, he comments on how uneasy the still-operating place makes him feel, as if he is being watched. Payne works his way through a cardboard Noir York City, Pink Bird Mental Institute, and a nightmarish version of Noir York until he finds an opening in the backdrop that leads to the backstage areas.

Going through a room full of props and into another backstage area, Max finds a locked door that presumably leads to Mona's hideout. Instead of knocking, he goes outside through a nearby door and climbs into a nearby second story window to find an employee room with bunks, lockers and a TV that's playing Lords and Ladies. Moving further into the employee dorm that Mona has converted into her apartment, Max notices her arsenal; he also hears singing coming from the bathroom as well as a shower running.

Max interrupts Mona while she's in the shower and tells her that they need to talk, so after getting out and dressed, Mona tells Payne that the Inner Circle is after everyone previously associated with the group. She also reveals that her contact is a member of the group and is willing to talk, so Mona offers Max a chance to talk with him.

Aside from the arsenal in Mona Sax's apartment and the bottles of painkillers found scattered around the room, there are two additional bottles found throughout the chapter: 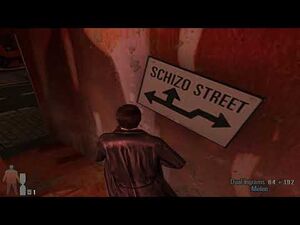