A Criminal Mastermind is the second chapter of Part I in Max Payne 2.

After the events at Vladimir Lem's warehouse resulting in the death of Annie Finn, Max decides he must tell Vlad about Finn's fate in person, and he drives to the former Ragna Rock nightclub, which Lem had renovated into a restaurant: Vodka. As he reaches the front door of the restaurant, he hears shooting and Max calls out to Vlad, and Lem tells him through the door that men are attacking him, and he needs immediate assistance. Payne decides to help him without calling for back-up, and goes around to the back of the restaurant, finding an entrance into the building.

Max shoots his way past several mafioso assassins and goes into Lem's office, overhearing a conversation on the phone between Vlad and his girlfriend. Shortly after exiting the room, Max finds one of Lem's men, Mike "the Cowboy", in a shoot-out with a few mafia goons. After taking them out he introduces himself to Payne, and the two of them team up to find Vladimir, making their way through the restaurant. Max and Mike make their way through the rooms of the building until they reach the former bar area of Ragna Rock, where a large group of Vinnie Gognitti's men have fortified the area. Once they are all taken out, Gognitti sends the last of his men with him to go take out Payne and Mike, but they are unsuccessful.

Max and Mike continue along the room and through a corridor, ending up in the booth facing the front entrance of the restaurant. Gognitti vainly tries to shoot at Lem, the Cowboy and Payne as he escapes, threatening Vlad as he leaves through the front door. Vladimir fills Max in on Gognitti's plans, explaining that the Mafia underboss is eliminating all competition in the black market gun trade and hinting that Vinnie is working with someone powerful. The detective questions Lem on his enterprises and their legality, but Vlad assures Max that he is no longer involved in illegal activities and as Max turns down the drink offered by Vlad, the chapter ends. 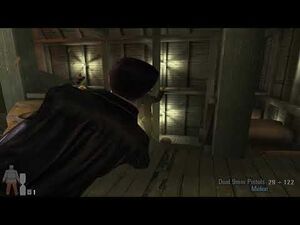