The 608 Bull is a large caliber, long ranged, eight-round revolver.

The 608 Bull is a large frame revolver packing eight rounds of "staggering firepower" that can be shot very accurately over short distances.

The 608 is a double-action revolver that chambers the .357 round. The long barrel gives it incredible accuracy - the Bull is the most effective pistol at range. The rate of fire is low but a good compromise for the other powerful features.

The 608 Bull appears to be an unlicensed copy of the Model 608 which is produced in Brazil by Taurus, the same company that produces the PT92. 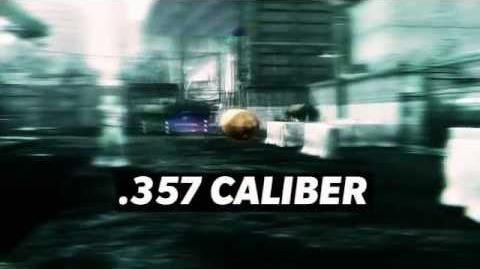 Retrieved from "https://maxpayne.fandom.com/wiki/608_Bull?oldid=27826"
Community content is available under CC-BY-SA unless otherwise noted.